There is a fantasy surrounding pregnancy portraying it as a blissful state when people glow with health and the miracle of life.  It is a time when most people feel pride in their bodies, more forgiving of their imperfections, and awestruck by their body’s capabilities.  Yet, when someone has experienced miscarriage and/or infertility, a pregnancy can, instead be filled with fear and anxiety.  Pregnancy losses or difficulty conceiving often lead to mistrust in one’s body, and the belief that it is defective.  The minute a wanted pregnancy is detected, elation and excitement are eclipsed by worry even if there are no indications that anything is amiss.

My miscarriage was a ‘missed’ miscarriage, meaning that there was no cramping or bleeding because my body did not recognize that there had been a fetal demise.  It was discovered at my routine 12-week ultrasound that the fetus had stopped developing two weeks earlier.  Although I had sensed something was wrong when my nausea and fatigue suddenly vanished, friends and loved ones reassured me that symptoms often come and go, and there was no reason to worry.  When I got pregnant with my older daughter several months later, I was terrified of having another loss.  After all, I had no evidence that my body could carry a pregnancy to term.  The first 3 months were extremely frightening for me.  I didn’t like to talk about being pregnant and didn’t go public with the pregnancy for almost 5 months, long after it was obvious to most people.  For reassurance, I weaseled so many ultrasounds out of my sympathetic family doctor, that my husband joked I was going to be banned from the ultrasound clinic.  Before every check up and ultrasound throughout the entire pregnancy, I would get anxious and tearful, always anticipating the worst.  Any moment I could not feel her moving, I would start to panic.  I rented a Doppler so I could check for the heartbeat at home between obstetrician visits.  I did not buy any clothes or toys or baby equipment until I was 8 months pregnant because I felt superstitious.  I worried excessively about how anything might affect the health of the pregnancy (walking behind a smoker on the street, waking up and discovering I was sleeping on my back, etc.).  I even worried about my worry.  I simply felt I could not relax until I was holding a healthy baby in my arms.  Fortunately, eventually I did.

After struggling with secondary infertility, I was lucky to become pregnant with my youngest daughter within weeks of beginning treatment.  This time I thought it would be easier.  After all, in the end I had already had a relatively uneventful pregnancy and delivered a perfect, healthy daughter.  But this was not the case.  Instead, I wondered if it was really possible that I could do it again.  I tried to keep the pregnancy secret until I was 16 weeks – despite people suspecting it when I was just 5 weeks along due to my rapidly expanding waistline.  I would ignore pats on the back and congratulatory handshakes as if they had not happened.  I rented a Doppler again.  I became tearful before every ultrasound and exam.  I worried that my weird diet I had assumed due to cravings and aversions (I only wanted to eat things artificially cheese flavoured) would negatively affect my baby’s development.  I worried about the airport scanners when we travelled.  I worried and I worried and I worried some more.  I worried until the day I gave birth to another perfect little girl.

Given the struggles many people face when trying to have their family, I got off easy.  Now, as an infertility counsellor, I see many clients who have suffered unimaginable losses, and years of failure and disappointment.  You might expect that once these individuals get pregnant, they are instantly ecstatic, but the reality is that many go through what I did.  Until they go home with a healthy baby in their arms, they are filled with fear, doubt, guilt, and also sometimes envy.  We are not the ones who will ever experience that radiance that is supposed to accompany pregnancy.  Instead, there is a dark cloud which casts a shadow over our pregnancies.  One which eclipses the excitement, pride, and joy of impending parenthood.  The confidence, innocence and bliss that other’s experience will never be our story.

Author
Erica Berman Erica is a mom of two young girls and lives in Toronto with her children and husband. Erica has a Masters in Counselling Psychology and a PhD in Exercise Sciences. She has worked as a fitness instructor and personal trainer for 20 years, and is a counsellor and therapist who assists clients with infertility, weight-loss, low self-esteem, depression, anxiety and relationship issues. Erica welcomes new clients. Her professional website is www.ericaberman.ca and her personal blog is http://talesofa30somethingnothing2010.blogspot.ca/ 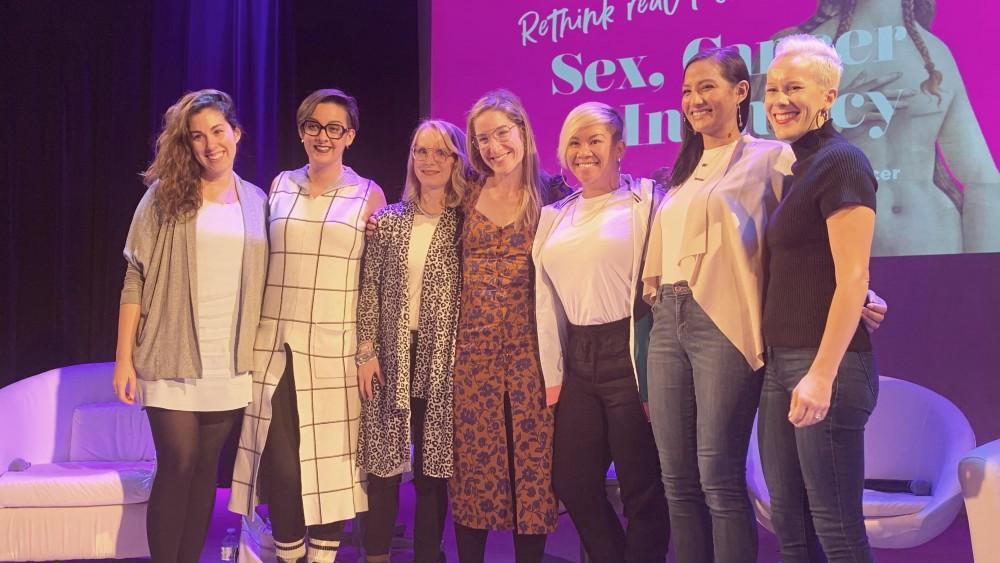 On October 29th, Rethink brought together a panel of experts from the healthcare community, alongside young women living with breast cancer, to talk openly about sex, cancer and intimacy.

When you are experiencing ‘pain in your privates’ who wants to talk about it? Well, no one really, but it is my goal to shed some light on something that has been kept a secret for far too long and has negatively affected people’s lives on many levels.